The traditional meal to celebrate the end of harvest

Over time, this was transformed into a convivial feast at which each of the guests shared bottles from his or her cellar with the other invitees.
The Paulée de Meursault is the best known of these celebrations.

In the Yonne department, and therefore in Chablis, this celebration was known as a "pêlée", or "poëlée", which has now become "peulée" with an "E" instead of an "A", but the idea is the same. The Peulée marks the end of the harvests and sees the winemakers of Chablis and their friends meet for a festive meal. Every year, the team organizing the event changes. It numbers four people: a "peulon," a "peulonne", an "argentier" and a "pressureux".

In Chablis, the Peulée takes place in October, on the Monday following the Fête des Vins wine festival. 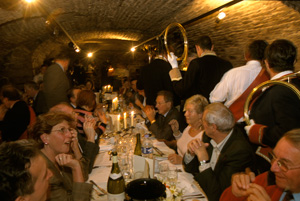